*Texas Judge James Oakley, who couldn’t hold his racist tongue long enough to post a message on social media, has been reprimanded and sent to a sensitivity training class on race. Sitting on the seat for the case of Otis Tyrone McKane, a Black man accused of killing Benjamin Marconi (no race mentioned, but seriously, will it take a rocket scientist to guess?) as he sat in his patrol car writing a traffic ticket, the judge posted on social media that it was time for “a tree and a rope.”

When confronted about the post Oakley attributed it to his personal feelings that the killing ?should qualify for the death penalty.? He said it had nothing to do with race. Then, it what can only be seen as an attempt to be cute, he added, ?Maybe I watched too many Westerns when I was little.”

Yeah, Black folk had a real problem with John Wayne too.

Oakley, who practices in the Burnett County area of Central Texas, was reprimanded by the State Commission on Judicial Conduct.

Racism in the judicial system is nothing new to people of color, Black folk in particular. What continues to amaze us though, is how blatant it continues to be, and how little accountability is taken. 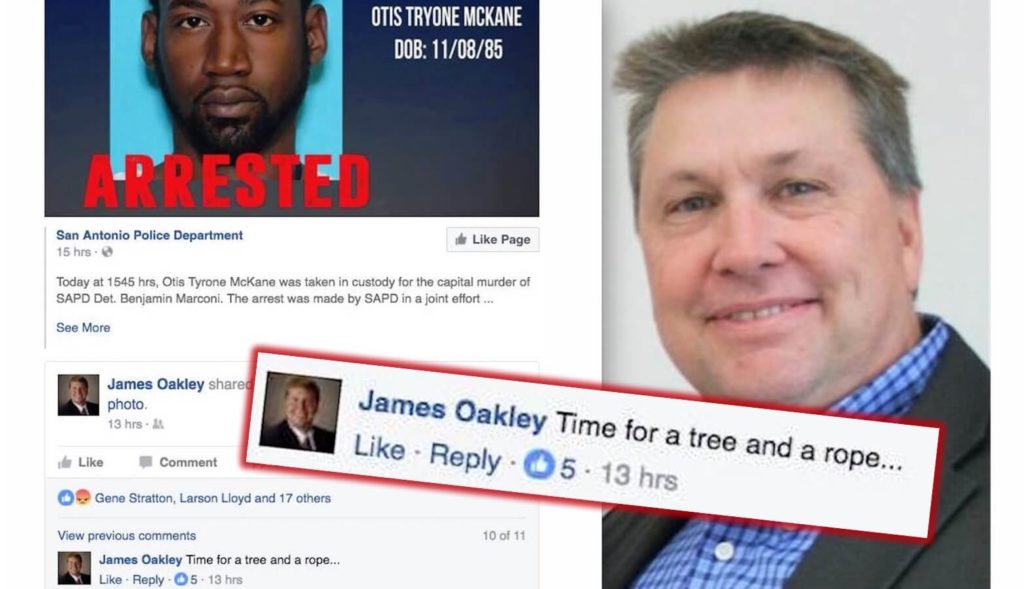 Yes, this man who is paid to affect the lives of people as he sits high up on the pedestal in a court of law; having taken an oath to make his decisions based on the facts brought to him — and those facts only — is obviously a racist. All that is missing here is the white hood.

Why use THIS as an example (of a rope and a tree)? Would it have been the first to enter your mind if the defendant was a white man?

According to News One Oakley stated, ?What I should have posted, if anything, is a comment that more clearly reflects my opinion on the cowardly crime of the senseless murder of a law enforcement officer.”

Yes, Mr. Oakley. That is what you SHOULD HAVE done. But no worries, what you DID was clearly reflect your true feelings, with no edit in place. And everyone watching knows that no sensitivity class is going to change that.