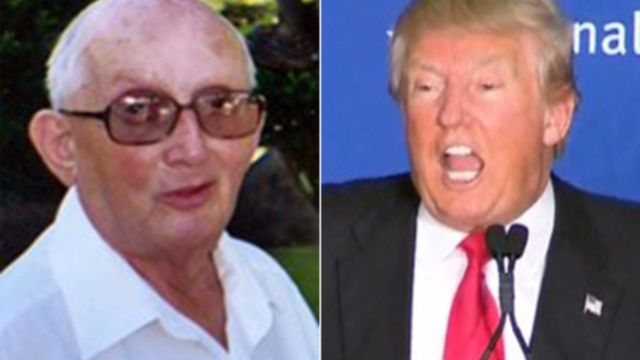 *Good lord. I can’t EVEN…but I will try. Can you imagine a great-grandpa on his death bed, with loving family around him, but heavens to Betsy, he just won’t let go? The family wants the best for him, after all he’s 91-years-old. The only thing that worked, after I can only imagine were numerous attempts to provide him with pleasant last thoughts, was one thing. The family feels a little bit guilty that they laid a little white lie on pa-pa but they did what they had to do. According to his obituary, they told him…

Trump was being impeached.

Corliss Gilchrist, a proud union factory worker, died soon after hearing the news, with a smile on his face — just days before his 92nd birthday.

Ah Trump, the gift that keeps on giving.

Now of course there is nothing publicly revealed that says Trump is going anywhere anytime soon, but people can hope right? Gilchrist’s obituary was published on Sunday in the Des Moines Register. The Iowa nonagenarian was described as “a proud union member and took great pride in his work with Armstrong Tire, retiring after more than 40 years of service. In his free time, he enjoyed fishing, gardening, tending his flowers, jigsaw puzzles, and watching the Iowa Hawkeyes. He also had a great love for animals, especially cats.”

WATCH: MAN SAYS HE’D RATHER DIE THAN WATCH THE ELECTION…AND HE DID!

Please don’t be surprised that several others have peacefully gone on to meet their maker after being given the same news.

The family of a 75-year-old Oregon man named Michael Elliott gave him the same news; and according to Yahoo, a Virginia woman proved we have got to be careful with our words when she met her demise prior to the election after saying she’d rather die than vote for Trump or Clinton. I wonder if she knew the man in the related story above.

Oh god. I’m getting off topic. All I can say at this point is, if I was president and it had this effect on people, I’d feel like something brown that has a foul smell.