*What may prove to be even more “interesting” than the actual firing of White House Chief Usher, Angella Reid, is who the current administration will bring in to replace her. Of course we would like to believe that any position awarded to a person is based on their ability to carry it out successfully; and there is no doubt by this writer that Ms. Reid was hired based on that assessment. But with the current administrations obvious comfort and delight to dismantle any and everything put in place over the past eight years by the administration of former president, Barack Obama; whether its outcome was successful or not, it will be equally “interesting” to see who will be chosen to fill the position now formerly held by Reid.

Black folk already know part of the answer to this, but what the heck, let’s put the question out there anyway.

The uncharacteristic ousting of a chief usher, who is said to otherwise be a long-tenured position, add to that it being held by an African American — the second such person consecutively to do so –is just one more kick in the head from the Trump administration towards their aim to make America great again.

According to The Washington Times, there have been just nine White House ushers since 1900.

Fox News says, the usher is responsible for the day-to-day management of the White House. The White House Historical Association says the title comes from the original role of ushering people in to meet the president, but over time the role has evolved to cover construction, food, and maintenance as well as personnel and administrative duties.

Reid, the first woman in the role, has opted to stay mum on her firing, telling NewsOne, who reached out to her for some kind of explanation: ?I think it?s best if the White House explains.? 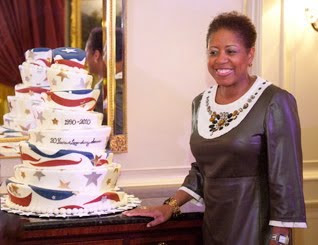 The news of the firing was confirmed by a White House official, offering the customary ?We are very grateful for her service and wish her the very best,? but I must admit my puzzlement at the White House Deputy Press Secretary Sarah Huckabee Sanders, who says the parting was “on good terms.”

I mean, how GOOD can someone being fired be?

“Good” terms might lend itself to a resignation, i.e. Ms. Reid, who, from her statement above, may not even have been given a reason, may have had time to witness things going on in The Big House, er, White House, that she felt she could not work with and decided to gracefully bow out — with no argument from anyone. But being fired means something happened. That something could’ve been pending from Day 1 of the new administration, who just needed time to get to her; or some recent development. And the fact that no one is talking can only mean that the administration is searching for a reason they hope will sound plausible to the public. Actually, who am I kidding, they won’t give a damn if it sounds plausible or not.

Reid was brought on board in 2011 by the Obama administration. Prior to her appointment, Adm. Stephen Rochon, the first African American in the position, had been there since 2007.

So WHO will be next in the role. I guess only time will tell.

I welcome your comments.

This editorial was written by DeBorah B. Pryor, senior editor at EURweb.

One thought on “Why Was White House Chief Usher, Angella Reid, ‘Fired’…And What Race Will Her Replacement Be?”