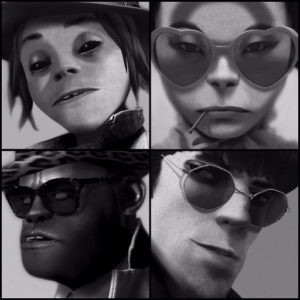 If listening to your favorite album isn’t enough, you may now be able to see it right in front of you. This is the experience that the band Gorillaz wants to give to its fans with the release of its upcoming album “Humanz.” Pitchfork reports that the band has released an augmented reality app that superimposes parts of their music videos onto the user’s immediate environment using a smartphone camera.

“Fans will be invited – via the app – to the Humanz House Party, an exclusive worldwide listening event which will allow fans to hear the new album in full for the first time,” the band said in a press release. “The Humanz House Party will be the largest ever geo-specific listening experience bringing people together across 500 locations.”

While using the app, users will be able to unlock different rooms, such as the band’s old Essex studio, by tapping on the music video elements. Pitchfork reports that the app will also have hidden extras, such as playlists crafted by the band members. A mobile app typically takes at least six months and a team of six to ten people to create, but they’re becoming more common in the world of music marketing as musicians seek new ways to connect with fans.

The Verge reports that the app is adding to the band’s recent digital marketing efforts, reaping the benefit’s of mobile marketing’s growing role. Data shows that 52% of paid search clicks come from mobile devices, so this is an effective direction for the band to be heading. Other examples of techy outreach from Gorillaz include a 360-degree version of a recent music video and a 2016 animated Twitter comic.

“Developed by Gorillaz and B-Reel with support from Deutsche Telekom, the fully immersive mixed-reality app is a unique blend of real world, AR, VR and 360 environments, using the technology in a narrative context for the very first time,” they said.

The app is available now for both iOS and Android.