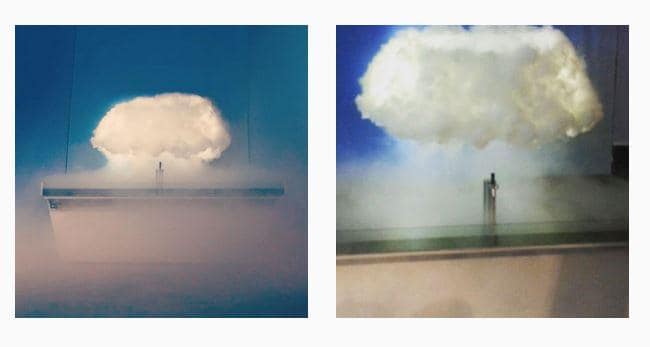 Mexico?s tourist board is displaying the new tequila rain-making contraption at an art gallery in Berlin, in a bid to attract German visitors. As it turns out the Germans love their tequila almost as much as Americans do, and more than our brothers and sisters in Spain, France, Japan or the UK.

The Mexican invention is a playful reminder to Germans, during their rainiest season, that Mexico offers sunnier, warmer weather. They?ve even programmed the machine to rain tequila only when it?s raining traditional droplets outside.

The system uses high-tech ultrasonic humidifiers, which change liquid tequila into a visible mist, which is piped into a plastic container and added to vapor that forms the cloud from which tequila rain falls?blah blah blah.

Who CARES about the ins and outs of this! In this case, the ends justify the somewhat complicated, technical means. Just the concept of TEQUILA RAIN makes me happy!

I don?t care WHAT ?President? Trump has to say about Mexicans, I am NOT for erecting a wall that keeps out a people who can figure out how to make it rain tequila!  ?Ese es muy bueno!

This blog was written by freelancer Michael P Coleman.  Connect with him on Twitter.

One thought on “On One Side Of Trump’s Proposed Wall: Tequila Rain”