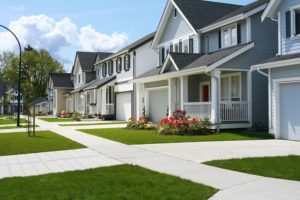 Branded as the always-on-the-move generation, Millennials may be breaking their own stereotypes and settling down in the burbs. According to a survey released last month by Zillow, this young generation made up 42% of homebuyers in 2016, more than Generation X and Baby Boomers. Most of these 18- to 34-year-olds were buying for the first time.

Zillow reported in a press release that the median age for becoming a homeowner is now 33, while it was 29 in the previous generation. While this may be due to financial habits, the evidence is clear. As Millennials are buying homes slightly later in life, they are also breaking the mold in other areas. Of these home seekers, 50% are choosing to settle in the suburbs, 33% in cities, and 20% in rural areas. When Millienials choose to move out of their current home, 64% stay in the same city, while just 7% leave their current state.

Contrary to their Generation X predecessors, however, Millennials seem to be starting smaller. According to Zillow, they are purchasing homes that are 1,800 square feet on average, similar to their grandparents. They are also choosing townhouses and homes with “shared community amenities” more often than other generations.

“We’re constantly learning about this young group of home buyers — we’re finding that they are more similar to older generations than many thought,” Jeremy Wachsman, Zillow Group chief marketing officer said in the press release. “Their views on community and homeownership are pretty traditional, and they don’t all fit the urban stereotype you might have in your head.”

Millennials seem to be prioritizing future planning. In a recent study, 40% of Millennials showed interest in long term care and life insurance policies, while just 25% of all consumers expressed interest. This attitude is also playing into their homebuying strategy. According to a recent Harvard University study on homeowner age demographics and remodeling, Milliennials are purchasing homes with improvement in mind.

“Although slower to move into home ownership than previous generations, millennials are poised to enter the remodeling market in greater force, buying up older, more affordable homes in need of renovations,” the researchers wrote in a press release.

The housing market will likely respond significantly to the influx of this young generation, Wacksman said.

“Millennials have delayed home buying more than earlier generations, but don’t underestimate their impact on the housing market now that they’re buying,” he said. “As members of this huge generation start moving into the next stage of life, expect the homeownership rate to tick up and suburbs to change to suit their urban tastes.”