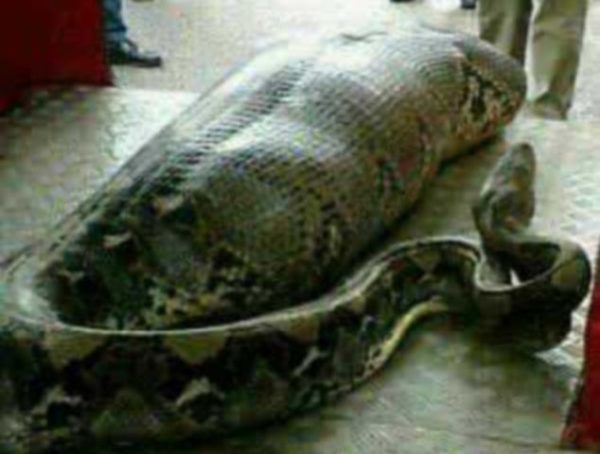 Don’t shoot the messenger! Another weird snake story that just popped up out of nowhere. According to the French news agency, AFP, the family of 25-year-old Akbar became worried when he didn’t return home from a trip to harvest palm oil.

When locals got wind of this, they went to the area where the man was last suspected to be and became disturbed by what they found. The area was strewn with identifiable items belonging to Akbar.

…and a big, fat, sluggish python.

?We were immediately suspicious that the snake had swallowed Akbar because around the site we found palm fruit, his harvesting tool and a boot,? a senior village official identified as Junaidi told AFP.

So what did they do?

They cut the snake open and (allegedly) found the body of the man inside.

RELATED: THIS VIDEO SHOWS A HUMAN SITTING UP INSIDE A SNAKES BELLY

Junaidi said that the snake swallowed Akbar whole. They say this was the only such fatality recorded in the region.

Now, just so you know. These humongous reptiles, who can grow upwards of 20 feet long, don’t make eating humans a habit — though their have been stories in the past of them swallowing young children…