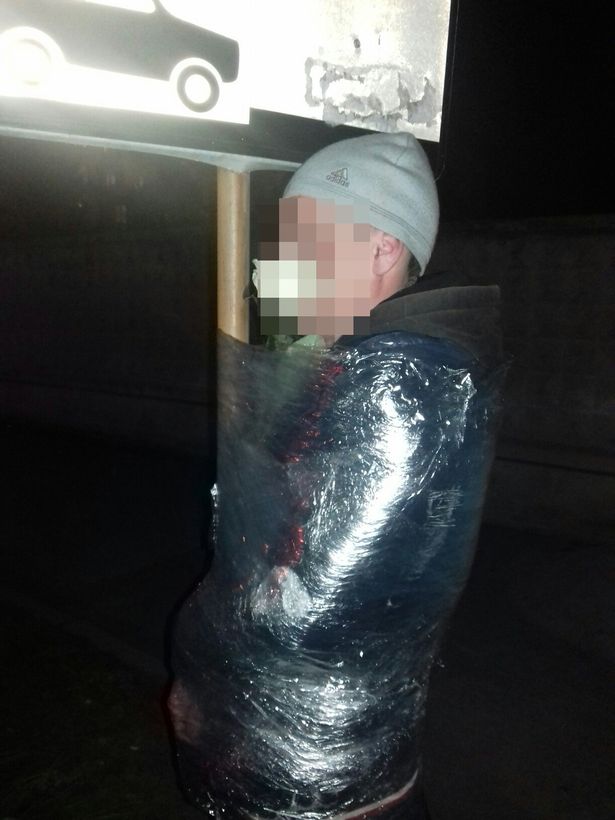 *Well here’s a sure-fire way to trap and humiliate a pervert: Lure him in using his perversion, then wrap his ass to a road sign. That is exactly what a group of vigilantes in the Ukraine did to a 22-year-old man they suspect was a pedophile after learning he had been sending photos of his private parts to a 14-year-old girl online.

Someone is bound to ask the “elephant-in-the-room question: what happened…any why?”

…and you know they did!

The man, said to be from south-eastern Ukraine’s Zaporizhia Oblast region, was invited on a date with a fictitious 14-year-old named “Diana.”

Of course there was no Diana there. But he was welcomed by a group of vigilantes who was not amused by his nasty ass actions. Not only was he allegedly sending photos of his private parts to ‘Diana’ but he asked her to do the same in return.

According to The Mirror, the pervert even allegedly said he did not want to share  her with other people and sent her examples of the type of sexually graphic photos that he expected from her.

The activists claim the man lied about his age on several occasions  to make himself seem more attractive to the fictional 14-year-old.

At the end of the video the man, called Skakun, admits that he is tied to a road sign because he is a pervert and that he does not blame the people who restrained him for what they did.

Comments on the video ranged from, “I think they were too kind. They could have punched him. I think after a while he will continue doing what he used to do before.”

…to: “If I were the government I would issue a law that would make all paedos [sic] shiver.”

2 thoughts on “Suspected Pedophile Lured to Location, Then Saran-Wrapped to Pole for Public Display”