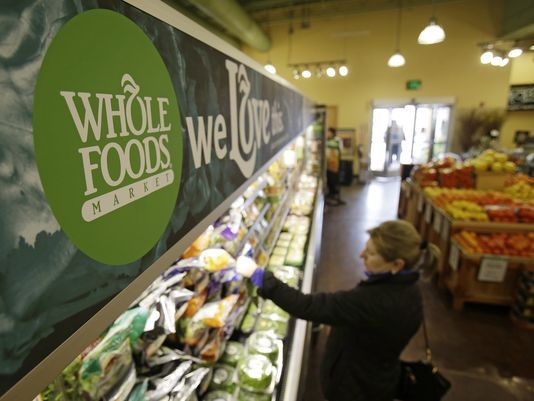 Therein lies the problem. Seems few people actually turn the packages over and read it.

I am sure that since ABC7’s Roberta Baskin investigation into organic foods that are, in spite of what the retailer promotes, imported from China (where there is no Department of Agriculture keeping tabs on it),?Whole Foods scrambled to find a plausible explanation – which, by the way, I can’t imagine what that would be because, well… a lie is a lie, right?

In one video, Whole Foods wouldn’t allow cameras into the store, so the ABC7 I-Team reporter actually bought some of the items and approached shoppers outside the store for comments.

“Honestly, I would have never flipped it over to see that it was a product of China,” one shopper told the news outlet.

One of the numerous items sold under the 365 Organics brand is?California Blend Vegetables.?But once you turn the package over and scroll down it says “product of China.”

So now the question becomes: Where does California come in again?

As the news report explains, organic ensures pesticide free and environmentally-friendly conditions. But I just read a report that quotes a study stating the air quality (an environmental condition)? in China causes the death of approximately 4,400 people EACH DAY.

This is something to be concerned about.

“The oversight that they have in China is not the same type of supervision that we have in the United States,” says one unidentified person when questioned about the legitimacy of the food being?organic; especially since there is no watchdog organization such as the USDA in China.

The USDA, by the way, does NOT inspect imported foods. Whole Foods employs a private company called Quality Assurance International. But even the company has stated:

“QAI has not certified any products in China.”

“So how would they ever know if the organic rules are being followed” is a question Linda Greer, a senior scientist at the Natural Resource Defense Council, who has actually visited farms in China asks. “I wouldn’t buy something organic from China [with the] idea that it was truly organic,” she concludes.

Now think about it people. Historically, anything we have seen or purchased that was?made in China?was more often than not: cheap. We’re talking China — where mass production is key. This is not Japan, where?quality?really matters.

The questionable quality of China’s produce has, this year alone (and we’re only two months in as of this writing), had the Food and Drug Administration — which checks for safety of foods — place a halt on 260 shipments of foods like strawberries that were “contaminated with bad pesticides, bacteria or filth,” according to the I-Team report.

The video below is not new, but it shows how stores have been ?pulling so-called “organic” products off the shelves with a quickness!

Unless we consider taking a lesson in how to successfully grow our own food, we had better start doing some deep research to see if our “organic” food is really organic.