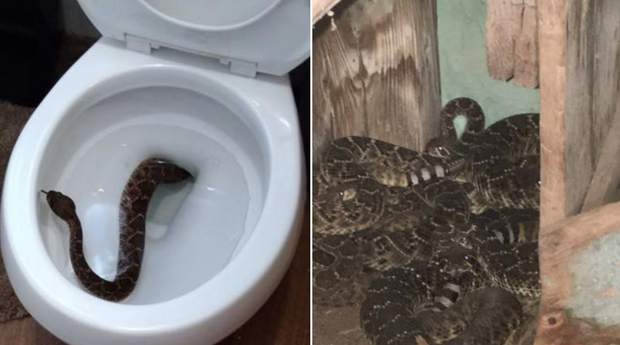 I think it’s irrational for anyone NOT to want to cut the head off of a rattlesnake that’s slithering around in their toilet bowl. ?

Hawkins processed his sadness, then asked the family if he could quickly inspect the house, just to give them a little peace of mind that the pieces of snake they were carting out would be two of a kind, that the snake that had been in the family’s toilet bowl had been a loner.

He hadn’t been. ?No, Jesus…and Hawkins had suspected as much.?

“If you do this long enough,” he shared, “you kind of understand snakes and what they do during certain times of the year. ?With rattlesnakes, western diamondbacks in particular, they’re real communal animals during cooler months. ?They tend to live together in dens.”

Hawkins first took a peek in an old storm cellar. ?He found 13 rattlers there, chilling in a corner.

He removed them — alive — and then crawled around under the house on his hands and knees, with a flashlight in one hand and a snake tong in the other. ?There, he found 10 more rattlesnakes — including five cute little baby ones.

My blood pressure has gone up several points just typing this story. ?But to Hawkins, it was just another day at the office. ?He’s caught several hundred snakes in the year since he opened his business. ?He’s proud that his business doesn’t kill their catches, but rather relocates them or donates them to local colleges for study.

“I get to keep snakes alive that would typically end up with a gunshot wound,” Hawkins said.

I don’t own a gun, and I am adamantly opposed to gun ownership. ?But if I ever found a rattlesnake in my house, let alone in my toilet, that would PROBABLY?change!

One thought on “Boy Finds Rattlesnake In Toilet, 23 More Found Underneath Family’s House”