*When it comes to contributing to a “cure” for world hunger, some things just appear to be?no brainers.?I mean after all, big business, small business, upscale individuals and those who are able to just make do can do?something?to make a mark. Right?

Some of us may not be able to give money, but we can give time (volunteer) at food kitchens. Others might be better able to drop a check in the mail, donate food, etc. But here is a concept that I just had to pass along because it does so much more than give food, it gives it with a dose of dignity.

I personally don’t care what anyone says, I believe that if there was a way for people to be able to pay what they can, there would be a lot less folks asking for things for free. Fewer panhandlers. Why? Because when and if people can give?something?vs. asking for charity, there is a sense of?dignity.?A feeling that says “I paid something for this” instead of “I couldn’t even afford to feed myself.”

More of us than care to admit have been there. Done that. And still, at times, are somewhere in-between.

Thank goodness for people like?Donnell Jones-Craven, the general manager at Philadelphia-based, Eat Caf?. He talks to Business Insider?about the strategy at this pay-what-you-wish establishment; and what makes it work.

According to BI, Eat Caf??aims to alleviate hunger and close the nutrition gap in West Philadelphia. The restaurant?will be located in a renovated row house in?the city.

And the beauty of it all is, the food is quality!

About a quarter of locals in this area don’t have access to healthy meals. Eat Caf? will offer residents?A three-course meal, which includes a?soup or salad, an entr?e (e.g. Cuban black beans with braised chicken or pork) with sides, a dessert (e.g. flan cheesecake), and a beverage. And on the receipt the charge of $15 is only suggested. In other words, it is not a price you HAVE to pay unless you can.

As I said, boy, what a concept! This is something I sincerely hope will catch on.

Another beautiful thing about the kind souls who took the time to put something like this in motion is the compassion behind it. Not only was it import that people who come to the restaurant eat a healthy meal, but no one aside from the patron and his or her individual server knows how much was paid. So they won’t be embarrassed by it.

“I want people to have the opportunity to fulfill each other?s need for community ? real community, and share experiences, embrace differences and have dignity and respect amongst all,” Jones-Craven says.

“The truth is we all need each other.” –Donnell?Jones-Craven 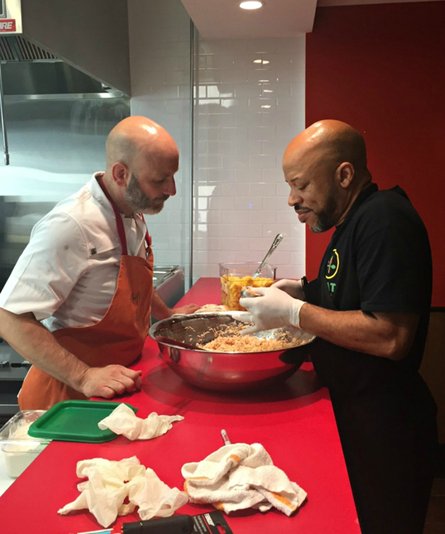 The ingredients in Eat Caf?’s meals will come from farmers who?grow crops within 150-miles of Philly. But the restaurant is also hoping that grocers such as Whole Foods, and Trader Joe?s will donate. Daily donations will be made by grocery chain Giant Food from items that?would normally go to waste. They will also provide a car to help the staff pick up food?from other partners.

So how, you may wonder, can a restaurant be expected to sustain this kind of charity with dignity strategy; not to mention make money.

SOMEbody has to be paying good money.

Good question. Jones-Craven says his restaurant is heavily dependent on grants from corporate sponsors; along with the generous diners who choose to pay more to help cover the costs for those who pay less than the suggested amount. The staff will also seek monetary donations in order to keep menu prices as low as possible.

Doesn’t this sound like something that other restaurants should at least consider? Please weigh in below and take it a step further: Share this article with your local restaurant(s).

3 thoughts on “Philly Opens the First Pay-What-You-Can Restaurant, Boy, What a Concept!”